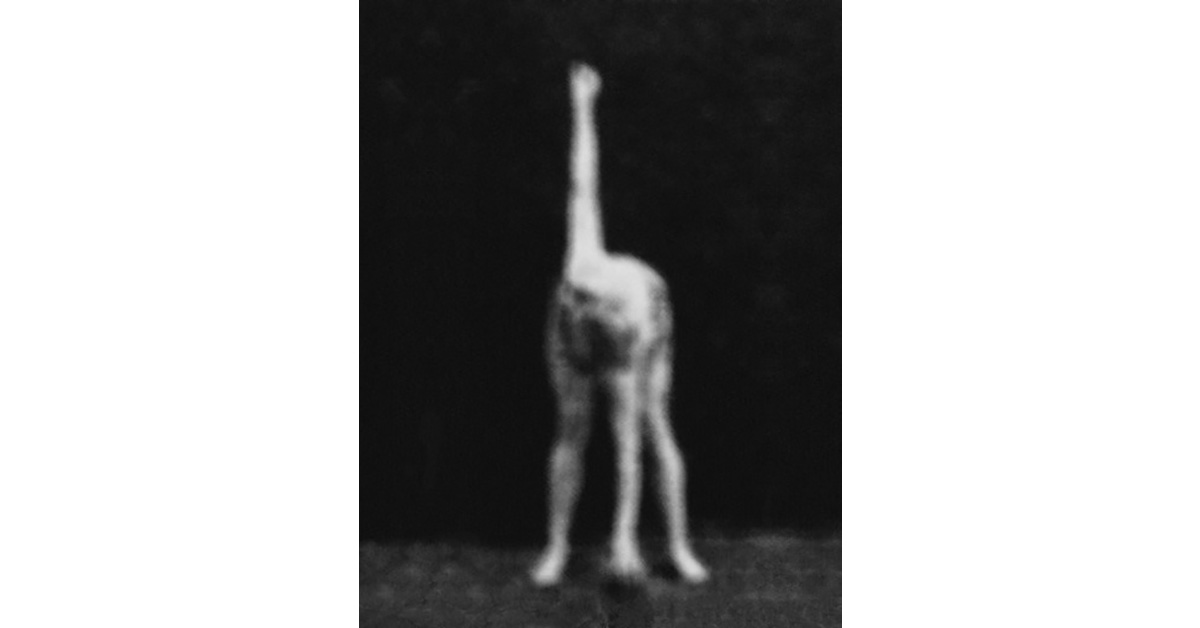 Curator Ulrika Levén about the exhibition.

About the exhibition, a language of movement

Gymnastikatlas is a beautiful linen-bound book from 1939. It was published as a textbook and reference work with pedagogical descriptions of numerous gymnastic movements. It is illustrated with photographs of gymnasts of different ages and genders, whose movements are distinct against a dark background. In the introduction, the author writes that he took all the photos himself, over a period of seven years. More than 8,500 of his 15,000 “Leica photos” were selected for printing. The descriptive nature of the images brings to mind the British photographer Eadweard Muybridge, famous for his pioneering studies of motion in the late 1870s. Now, more than 80 years after it was published, Anne Thulin has selected two series of photographs from the Gymnastikatlas for her installation One step away. The pictures were originally intended to convey body movements in sequences, but Thulin’s selection of only a few images paradoxically focuses our attention on a frozen moment in the sequence and conveys a visual stillness and weight. It also invokes the essence of a written language, as the body postures in the slightly blurred pictures are often so simple that they give the illusion of graphic signs.

The site has always been a crucial element and sets the direction of Anne Thulin’s work, and One step away is no exception; the fact that Konsthall 16 is located in the Riksidrottsmuseum gave her the impulse to look back at her own personal history. The source of the exhibition, the Gymnastikatlas, was published by her grandfather, J. G. Thulin, a gymnastics teacher who founded the Sydsvenska Gymnastikinstitutet with his wife Emy in Lund in 1907. In her childhood, Anne Thulin spent a lot of time at her grandparents’ gymnastics institute, where the wall bars and other equipment represented a place for play, movement and exploration. Movement also became a recurring theme in Thulin’s work.

“When we play, we explore our boundaries, between control and the magically uncontrolled, where the unexpected can happen. Play is right on that boundary, and so is art.” The quote is from the artist in connection with the exhibition Ludo Alludo at Lunds Konsthall in 2003, in Lund, where she grew up. The place and her own story played an important part in the exhibition, conveying the atmosphere of a gym, but she had filled the rooms with unusable, slightly limping and twisted gymnastic equipment she made herself. The physical vulnerability of the body, tension, and the playfulness she recalled from her childhood gymnastics hall were the theme. Pictures from the Gynmastikatlas also featured; a seven-metre-long series of images that had been waxed to achieve a skin-like quality showed a woman hanging by her arms from wall bars, rhythmically and repetitively rotating in eternal motion.

Playfulness and movement are also suggested in the series with large, red balls, Double Dribble that she has exhibited (in) 2005─2019 in various versions in Sweden and internationally. These enormous red vinyl balls were placed with great consideration in various locations, directly on the ground, in buildings or high up in trees. In Sweden, there are two permanent installations: in Wanås Sculpture Park and at the Museum of Sketches in Lund.

Language is also one of Thulin’s fundamental themes. After living in Stockholm and New York for many years, she has personal experience of existing between two languages, and several of her earlier works deal with this duality. For years, she created works consisting of waxed newspaper pages that were layered and presented in sculptural shapes where multiple layers are visible simultaneously in “double exposures” that shroud the original texts in mystery and makes them virtually illegible, while the new sculptural shape opens up alternative readings.

Many of Thulin’s early works were serial, and she pursues this approach again in One step sway, by selecting two series of illustrations from the abundant material in the Gymnastikatlas. From these two series, in turn, she has chosen a couple of photographs and printed them larger than life. Where the originals strive for exactitude, the blurriness of the contours in the blow-ups of the small pictures makes the figures look abstract. What are we actually seeing? Between the gigantic figures, a horizontal line of small pictures run along the walls, like a film strip connecting the large bodies. Whereas the images in the book are in an order aimed at showing how the movements should be executed, Thulin has rearranged them, creating a new rhythm. Interspersed with the small photographs are three-dimensional wire reliefs that draw a simplified, sparkling trace of movements against the dark backdrop, from figuration to sign. The pictures create a rhythm, like a timeless dance along the walls. But is this a joyful dance or a Dance of Death, an allegorical image to remind us of the transience of life? This motif is found in art, literature and music from all ages but was especially popular in the mid-14th century, when pandemics, war and starvation harvested many lives. In the middle of the far wall, a figure stands bent forward with outstretched arms, in a pose of pleading or crucifixion, but without any visible hands. The eternal dance, however, takes the movement further than the arms of the figure, and the hands are found at either end of the long picture strip. Thus, when we stand in the middle of the room, we are held in a singular embrace.

In her artistic practice, Anne Thulin constantly revisits language, imagery, body language and signs. Here, the language of movement is the focus. The images from Gymnastikatlas allude most poignantly to the place of the exhibition and to her own history, but the exhibition also entails moving ahead, One step away from its origins, inviting new associations and readings.