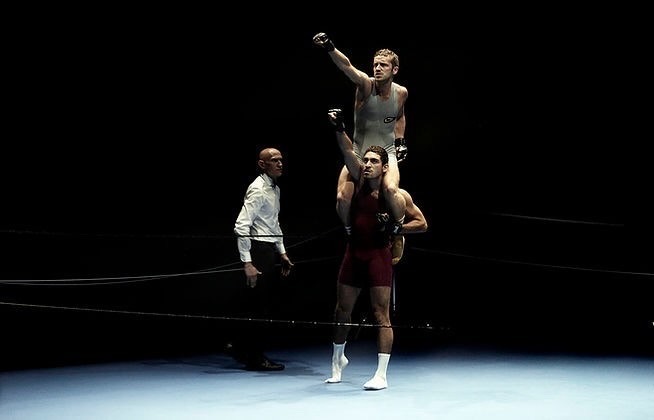 About The Ring beyond the mat by Ashik and Koshik Zaman

Ringen bortom mattan / The ring beyond the mat

The art of living is more like wrestling than dancing, because an artful life requires being prepared to meet and withstand sudden and unexpected attacks. These are the words of the Roman emperor Marcus Aurelius (121–180). But references to wrestling are found even further back in time. In Beni Hasan in Middle Egypt, graves from around 2040 – 1640 BCE have wall paintings showing more than 200 wrestling couples, and most of the holds used today are represented. There are also descriptions of wrestling from around the same period in the Mesopotamian Gilgamesh epic; in ancient Greece, where wrestling was one of the primary Olympic games, wrestlers are portrayed in sculptures and on clay vessels. There are also early findings from Asia; the now famous Japanese art of Sumo wrestling is mentioned in written sources from the 8th century, and the oldest Indian form of wrestling, Malla-Yuddha, was described back in the 13th century. And the list goes on.

Up here in the Nordic region, wrestling has been portrayed in many older sources. Wrestling occurred in Sweden’s old rural culture, as a game with a rather fuzzy boundary to actual fighting. But it was rarely called wrestling; instead, it was known as livtag, kragtag, glima, and a variety of other names in local dialects. In Icelandic sagas, leikfang is mentioned as a common game in the Middle Ages, while fang was a form of wrestling that warriors were required to master. Glima, which involves grabbing the opponent by the belt or trouser waist, is also described in the Icelandic sagas and has now become something of a national sport.

Wrestling as a competitive sport was highlighted when the modern Olympic Games were resumed in Athens in 1896, as one of the classical athletic fields. In Sweden, however, it did not become popular for many years; the first Swedish male wrestlers did not compete in the Olympic Games until 1908 in London, followed by women wrestlers nearly a century later, in Athens in 2004.

Besides the measuring of strength that wrestling has always involved, it has also had a ritual purpose all over the world, as a symbol of the battle between good and evil, or a form of dance performed as a prayer for good harvests. In short, wrestling has been around for thousands of years and has conveyed many different meanings.

Our warmest thanks to the exhibition curators, Koshik and Ashik Zaman! With their profound knowledge of both the practice of wrestling and what it can represent apart from being a sport, they have, as the exhibition title suggests, moved beyond the mat, the gym and the changing rooms. Through the works of eight artists, they propose a more conceptual approach to the sport. Wrestling as a choreographed dance, as music, as entertainment, or a life line, but also as a phenomenon with deeply personal implications. Wrestling as the art of living!

The Ring Beyond the Mat

What has now come to be a group exhibition, The Ring Beyond the Mat, combining a dual passion for contemporary art and wrestling, began with a kind of bucket-list intention spanning several years. This is the exhibition we always wanted to do, ever since we started working as curators. Our dialogue with Ulrika Levén, artistic director of Konsthall 16, began back in autumn 2019. Konsthall 16 at Riksidrottsmuseet is simply the optimal venue. What is always remarkable in the encounter between art and sports is how people generally see these two disciplines as being polar opposites, when, in fact, they have a great deal in common. The world of sports is such a universally uniting interest that it would be strange if it did not inspire artists, as this exhibition goes to show. Wrestling is an ancient sport; it was portrayed in art several thousand years before Christ was born.

This exhibition could have been curated in many different ways. At an early stage, it had a more documentary nature, seeking to show the various geographically-influenced types of wrestling. But that would have been a totally standard and predictable exhibition. On a personal level, wrestling has been about more than our own physical practice. Halfway through the project, we scrapped our exhibition proposal and went back to square one. As a sport, wrestling is so multifaceted, and it felt important to capture that. We often find ourselves thinking of wrestling as a dance, with a pinch of controlled violence, and that notion has been the lodestar for this exhibition. Wrestling can be much more than a sport, and several of the works in the exhibition use wrestling as a means to express something beyond sports. What we present is a conceptual art exhibition based on wrestling without necessarily being only about wrestling. Some considerations were important to steer clear of. The dominating media image, of white, muscular male bodies in tights on a mat is easy for anyone to achieve. You don’t need us for that. We were also keen to acknowledge the often-overlooked gender perspective. It’s so easy to associate wrestling with violence and pain, but the comparison to dance and choreography has been given a tangible space in the exhibition.

It is especially gratifying that one of the featured artists, Clément Courgeon, who is shown in Sweden for the first time, is both an artist and an active wrestler. It turns out that wrestling is a family tradition, and the work The Book of Wrestling, created specifically for the exhibition, celebrates the sport with a sumptuous potpourri. Wrestling is often passed on, as Theodor Johansson’s crocheted wrestling mat Inherited Repetition illustrates, inviting comparisons to how crafts traditions are passed down through generations. The work, which took months to make, is also a reminder of stubborn repetition; the constant “grind” required to reach excellence in sports.

Josefina Malmegård’s work Heavenly Bodies II also concerns the passion for sports that will be familiar to anyone who ever pursued a sport ambitiously or experienced it intimately. It encloses you in a bubble, where the outside world goes on around you but doesn’t concern you in the moment when the sport takes over.

The exhibition features the Spanish dance company KOR'SIA’s dance work Human, as a documented performance. This work highlights the symbolic nature of wrestling and focuses on the growing threat in society to individual freedom(s) and the resistance that arises in response.

Constantin Hartenstein’s FEIT is based on East German educational archive material from 1979. By warping the tempo, the mood is changed, emphasising the homoerotic element that is present and can be identified in wrestling. It concerns positions and holds that inevitably suggest tenderness and sexuality; aspects that wrestling is associated with today, not least in queer meme culture on the internet.

For years, Jasmin Daryani has been following a wrestler who has now become a close friend, since he arrived in Sweden as a young, unaccompanied refugee. In a far-reaching project, her film Ljusskygg (Hiding from the Light) portrays his wrestling as a metaphor for his personal battle with the toughening process of seeking asylum in Sweden. Her sculptures in the exhibition also explore a common phenomenon in wrestling: “cauliflower ears”, a deformation that often afflicts wrestlers as a result of repeatedly being thrown and injured.

The idea for Dev Dhunsi’s Akhada Temporarily Closed Due to Fog came during a visit to India to cover the regional wrestling form called Kabaddi, which is distinctly different from typical wrestling since it is a team sport. In the exhibition space, visitors are invited to look beyond the horizon of western sports.

In her work The Altorilievo Fight, Ditte Ejlerskov creates an intervention in the historical portrayal of wrestling as a male-coded sport by adapting and paraphrasing the iconic classical sculpture The Wrestlers. Many people will instantly recognise this work, with bodies grasping each other, which is forever being reproduced and has contributed historically to gendering the sport.

The exhibition has been arranged in three chapters, where the exhibition in Stockholm is one chapter, a presentation of Jasmin Daryani’s film in Visby forms the second, and an evening event at the Riksidrottsmuseum is the third. And yet, it proved impossible to cover the subject completely – and that was never our ambition. We are happy if the exhibition opens the viewers’ eyes to the unexpected.