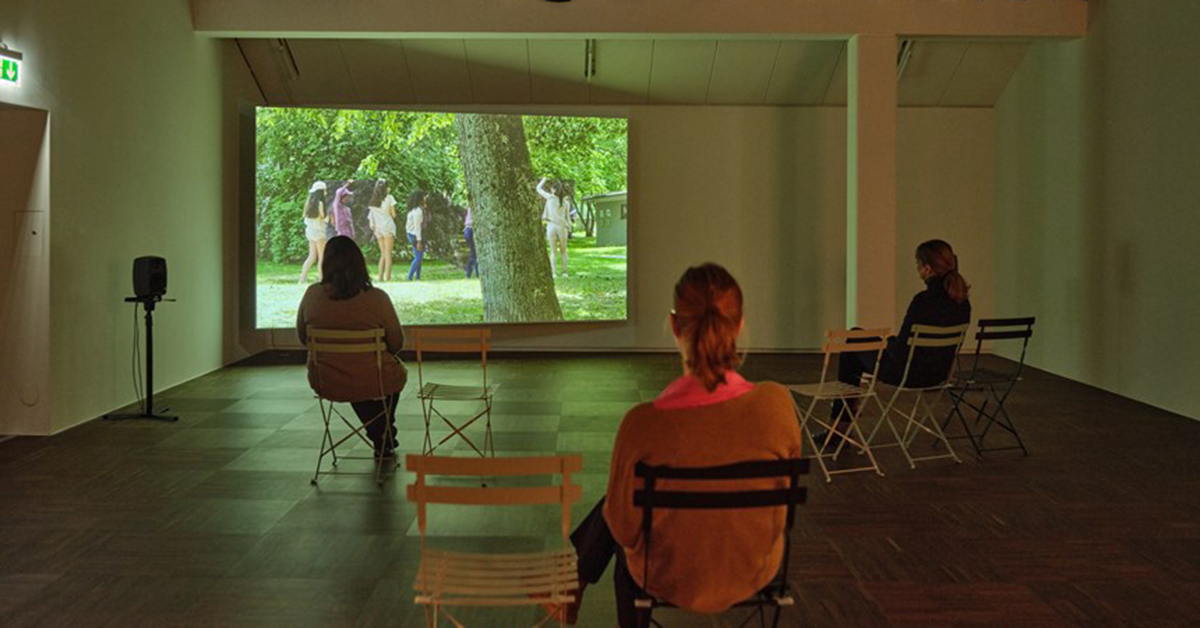 About In purple by Johanna Billing with Mix Dancers

It’s early summer. Lush, verdant scenes from a housing estate, along with the muffled sound of lawnmowers and a suggestive music score set the tone in the introduction of Johanna Billing’s film In Purple.

About the film and the installation at Konsthall 16

Along the pathway through the green park area comes a group of young women and girls. Between them, they are carrying large, heavy sheets of purple glass. Now and then, they pause between movements to gradually hand over the bulky, fragile panes to the younger girls. Their gestures are precise and focused and every shift of position leaves them vulnerable, since the slightest mistake could injure them and damage the glass. This is a remarkable procession through one of the housing areas built for the Welfare State.

The young women who tenderly hand over the glass sheets to the younger girls are the initiators of the dance group Mix Dancers. For three years, Johanna Billing collaborated closely with the dancers to create this film. The production started with the government programme Konst händer (Art is Happening), and an invitation from the Public Art Agency to produce a public work in one of Sweden’s modernist housing estates. In association with the Municipality of Jönköping, the choice fell on Råslätt. This housing area is just south of Jönköping, where Billing grew up; in her youth, she danced five days a week and was involved in volunteer work, personal experiences she shared with the dance group.

Mix Dancers was started in the mid-2000s by Sibel Akdogan, who was then twelve and danced hip hop and Afro. Alongside her own dancing, she initiated a dance school, Mix Dancers Academy, where her sister and friends learned street dance. In the film, the camera pans an empty gym and large outdoor sports grounds: basket ball, table tennis and a pile of running track surface material. Finding a place where the group could practise proved difficult, however. Dance often gets the short end of the stick when it comes to funding for physical activities for youths, since it tends to be seen as a cultural pursuit rather than a sport. In the end, the young dancers managed to get a windowless room in the basement under the Råslätt’s youth club. Even if they received some support from the local youth and study organisations, the group’s survival was entirely dependent on the young untiring volunteers.

Behind the film In Purple lies a long process that manifests the collective visions of both dancers and artist. The sheets of glass carried by the young women in the film illustrate how fragile an activity powered solely by volunteers can be, and how a young generation of pioneers is now handing down its work to the next generation. The transparency of the sheets also stands for the invisible efforts of the group members to achieve the success that Mix Dancers have had over the years. With the film In Purple, they unite to show the difficult and hard work that lies behind the dance group’s existence, and their constant fight for better terms for young girls and women.

Several of Johanna Billing’s works deal with issues of identity, interaction and changes in social structures, often focusing on the position of children and youths in society. Her approach is process-based and in close cooperation with other participants, with the aim that the projects will lead to a form of learning, or to new perspectives on phenomena, for everyone involved, including herself, all her collaborators and those who view her works. Optimally, the works serve as a catalyst, initiating new discussions. The films, which are shown in a loop, may at first seem documentary, but they are in fact carefully staged and planned, while allowing all the participants room for improvisation and spontaneous experiments. The narrative is told visually, and while the participants’ voices rarely feature prominently, music plays an important part.

Back to the procession of young women who move intently through Råslätt as life goes on around them. Families with kids pass by, some curious kids follow them for a while and do a few dance moves – maybe they are future members? The camera lens scans the windows of the buildings that follow the parade like vigilant eyes. The facades also have signs of artistic embellishment. In the 1980s, large sections were painted in colours that were in fashion, purple, pink and pastel green, by the artists Jon Pärson and Lennart Joanson. The large, heavy glass sheets are in the same purple colour as the walls of the basement room the girls and women painted themselves, and the same dimensions as the windows of the youth club on the floor above. The same windows that sometimes, when the weather allowed and the dance group moved outside, were used as mirrors for their practising. The colour of the glass sheets also interacts with other elements in the film; violet painted sections of the facades, a purple parasol, lilacs in bloom and a mauve carpet hung over a balcony. With considerable difficulty, but unrelentingly, the young women carry their heavy, awkward and fragile burden through the housing estate. In the continuous film loop, they keep on going with their hard task. 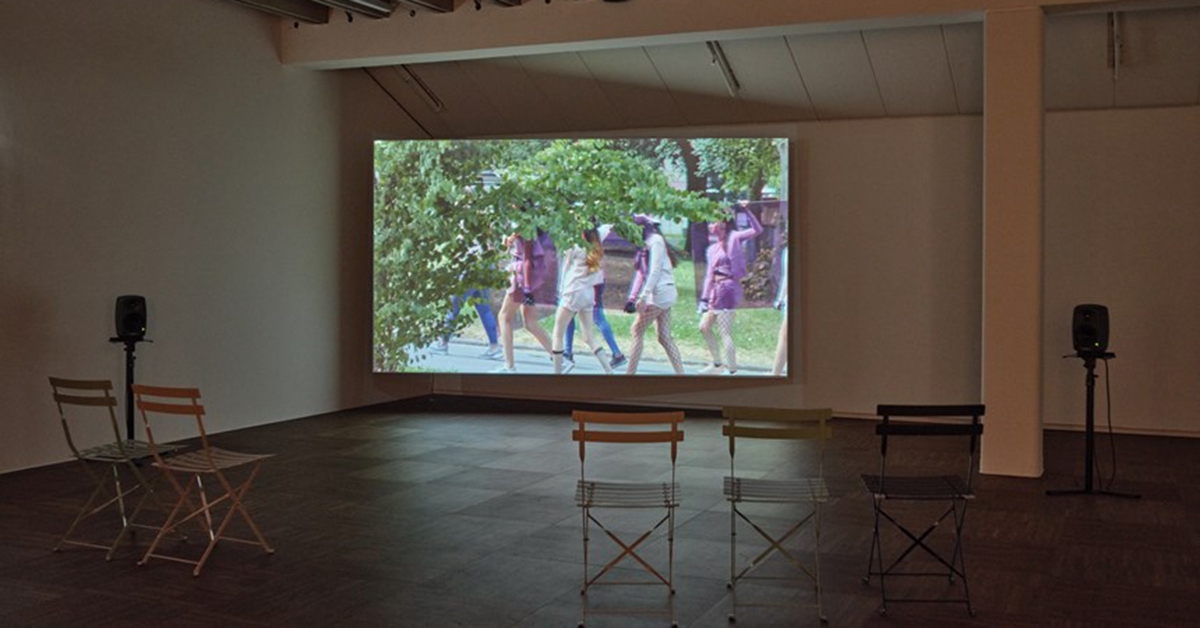 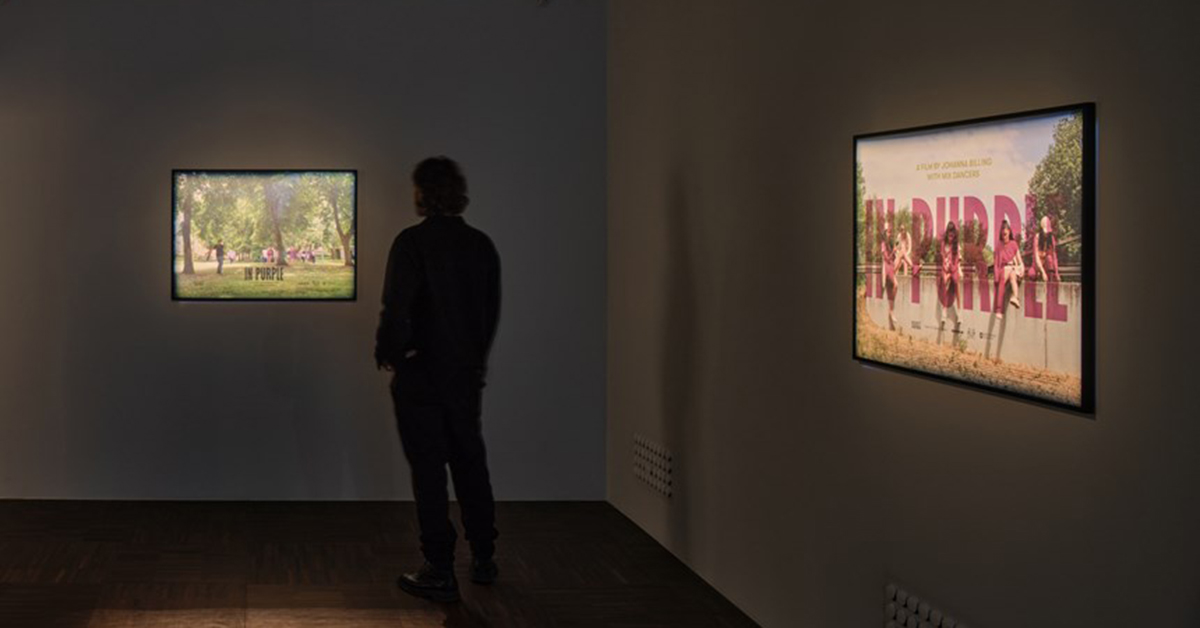