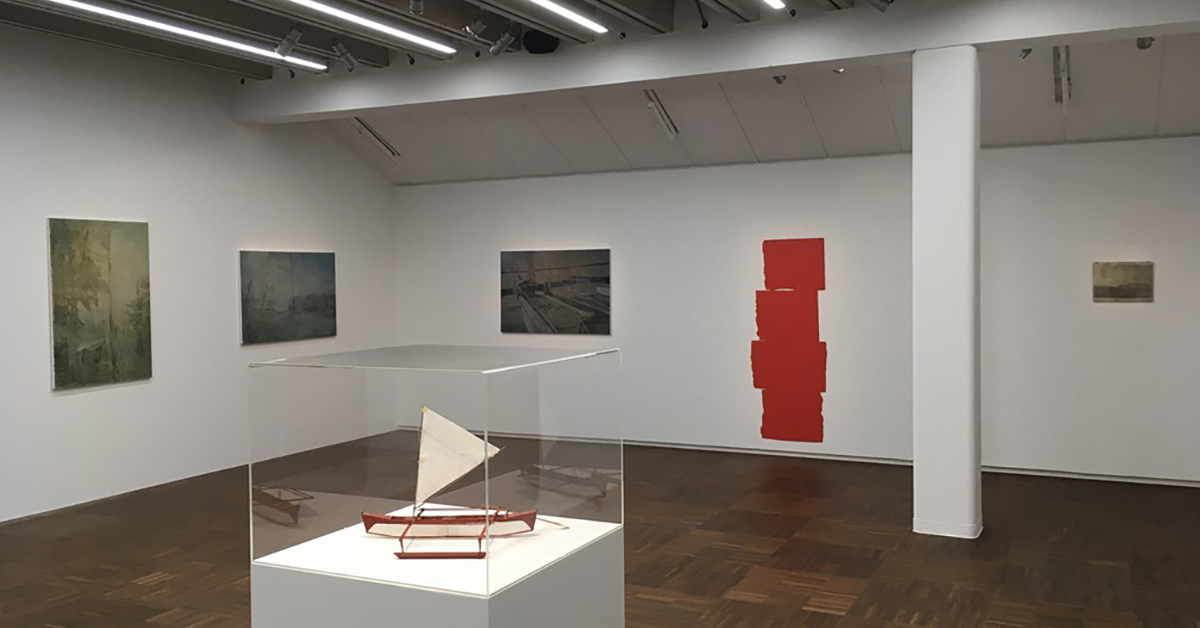 About Crash colors by Jörgen Agardtson

Curator Ulrika Levén about the exhibition

“It is as though the objects were covered with an exceedingly thin coat of paint, allowing only a hint of light to trickle through from below; layers of paint that are illuminated, but not luminous”. This is how the Swiss poet Philippe Jaccottet, in his poem Coleurs de terre tries to convey the metamorphosis of a landscape, where the colours seem to become translucent. The words are also suitable to describe how Jörgen Agardtson’s layered paintings are experienced.

For many years, Agardtson has explored this technique, where an underpainting in grey tones, a so-called grisaille, is covered with several thin, transparent layers. Historically, grisaille painting was used to create the illusion of three-dimensionality, but also to achieve an underpainting focusing on intensity, on light and shadow, where colour was added in the subsequent layers; this method can lead to the impression that light emanates from within the painting. Agardtson makes his own paint with sun-thickened linseed oil, and several of his paintings are also given a final coat of yoghurt to take the gloss off the linseed oil, leaving a nearly-invisible mist on the painting. Here, old painterly methods meet contemporary motifs. It is not the time-consuming technique that is essential, however, but the image itself that shows the way and determines the medium. Alongside painting, Agardtson has also worked with photography, film and installation, and the content comes from his travels or other sources, such as books, magazines or the internet. A common trait in his paintings is the dreamy quality, a spatiality somewhere between the illuminated and the dark, between sleep and waking.

The contrast may be strong between the delicate yet shadowy layered paintings and the brightly colourful Crash Colors , which gave the exhibition its title, but in terms of contents it is the latter that underpins the exhibition. This work consists of two sections with giant flowers in complementary colours that seem to clash in two senses. The origin is a pair of swimming trunks from California, a gift to the artist many years ago. His initial reluctance to wear them due to their vivid print prompted him to begin exploring surfer culture. This, in turn, led him to discover the boats used in Pacific Ocean cultures since the late 1800s – sailing canoes with one or two outriggers – and he was eventually encouraged to obtain drawings and build his own traditional boat, a Wa’apa. His sailing canoe features in a couple of smaller works that have the appearance of old black-and-white photos, one of which is embellished with the same type of stitching as that used for the sail, and in a paper model in the scale of 1:10. 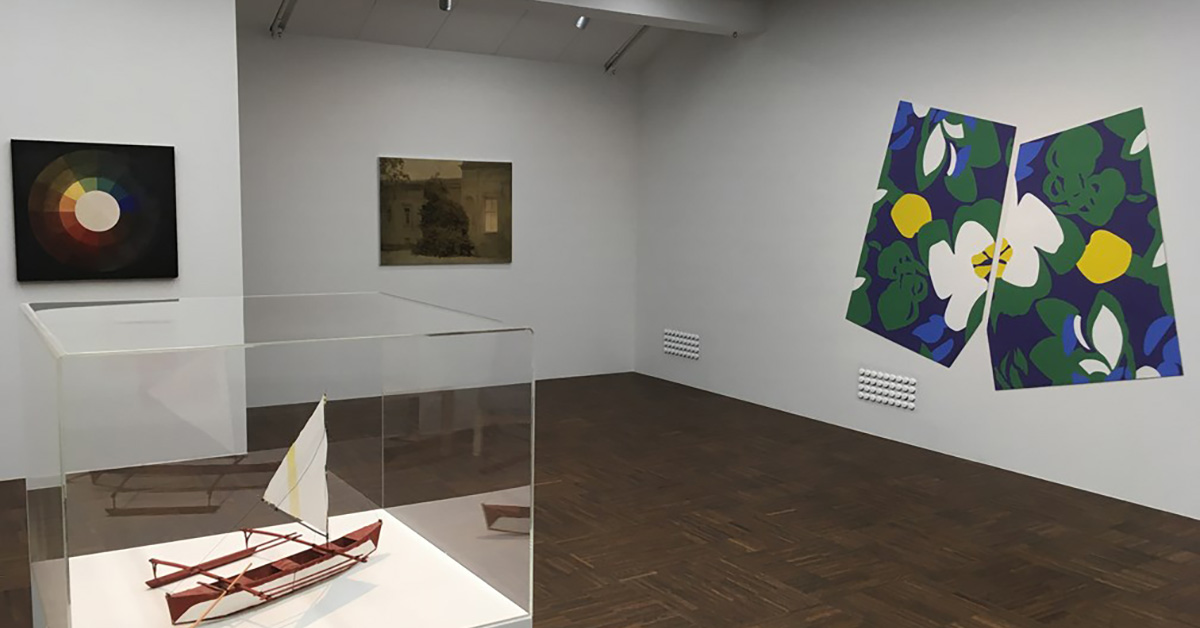 Building the boat was not merely due to his new-found theoretical interest in sailing, but also part of a process of change and simplification that Agardtson went through over a few years. He moved from the city to a rural cabin deep in the forest and grew increasingly aware of his entire lifestyle and began to pay more heed to the surrounding nature and what it brought to his artistic practice. Similarly, he became receptive to the entire complex and meticulous process of boat-building. To a considerably higher degree than the concrete and practical work, it came to be all about the individual challenge of obtaining the necessary knowledge on construction, sailing and landing, and ultimately about the balance that his project required, in sailing and in life.

Like a visual relative to Crash Colors, the slightly lopsided Beach Ghost, made of “driftwood” from the artist’s studio hangs on one of the opposite walls. In nautical Swedish, the term gast denotes a deckhand, but it can also mean the ghost of someone who drowned. In this case, the figure can be seen as a kind of self-portrait. Pieces are joined together to form an angular, awkward figure of the same height as the artist, a beginner who, in his own words, “is dazzled by the sun, a bit frayed around the edges, and trying to find his form in the space.” The beach ghost is painted International Orange, the colour used for safety reasons to make objects stand out from their surroundings especially in fog or dense undergrowth. The bright colour also complements the greyish-green and blue tones of the layered paintings.

The three pieces The Secret Garden, Biotope and Night Camp are all in the layered technique described earlier. The subject matter intimates that a photograph was used as a starting point early in the process; but countless layers of thinly applied colour slowly bring out a new image on the canvas. The subject matter of the pictures relates to the boat, life in harmony with nature and the concept of freedom on an individual level. The first image portrays events on a specific early sailing trip in Laholmsbukten, when the artist’s skill in sailing and interpreting the clouds was put to the test, and something almost magical happened: a swarm of butterflies suddenly surrounded the boat that was temporarily anchored. Night Camp also relates to a specific sailing trip to a coastal nature reserve called Sibirien outside Ängelholm, where he encountered a couple of long-distance yachtsmen. The natural habitat around Agardtson’s house is portrayed in Biotope, where a Hennessy Hammock, a combined hammock, sleeping bag and tent, is glimpsed between two trees in the forest. Shaped like a boat, this airborne vessel cradles and rocks its passenger under a wavelike firtree branch.

One of the older paintings in the exhibition, Insomnia, also takes us into the twilight zone, between sleeping and waking, but in another period and place. It tells the story of a Russian count and ambassador who suffered from insomnia and therefore commissioned Bach to write a piece of music that would lighten up his sleepless nights. His friend Goldberg was to play the music for him, and this is where the work supposedly got its name, The Goldberg Variations. It is almost as if we could hear the distant tones of the clavichord coming through a window of the dusky palace, and a soft but intense light seems to radiate from within the painting.

A common feature of all these layered paintings is how they convey this sense of intangibility, evasiveness, or, in the words of the poet, that which lasts only a moment, on the cusp of perception; just before the colours fade into darkness.

A third style, unlike the others, is offered by a work in ink on unbleached linen canvas, a hybrid between painting and object. It was modelled on a draught screen from the corner of a German philosopher’s country cabin, but the canvas here helps to create another kind of spatiality. Like part of a stage set, it offers intimacy, and the draped curved form alludes to ocean and light waves.

Altogether, the themes of this exhibition all touch on life choices and challenges, and what our surrounding nature can tell us if only we listen carefully. The boat is a central and unifying element, representing the actual challenge of sailing, where power and balance are crucial, but also as a symbol of our life journey, or the vessel that carries us between different states of mind. With such essentially disparate approaches as a pair of floral bathing trunks in vivid colours that suggest a sunny beach, to the more distanced and hazy layered paintings that whisper their tales in another mood, we are transported to another world. A world where, to quote Jaccottet once more, “... objects and thoughts come closer together; objects remain objects, grass remains grass, but something glimmers behind, or below, or inside.” 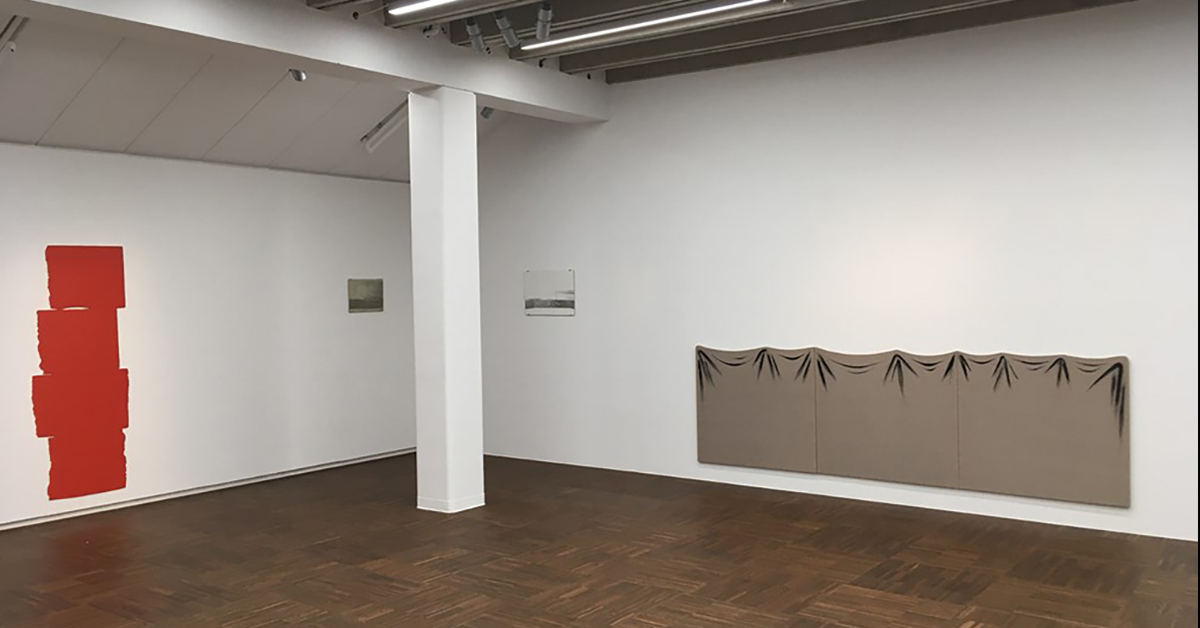