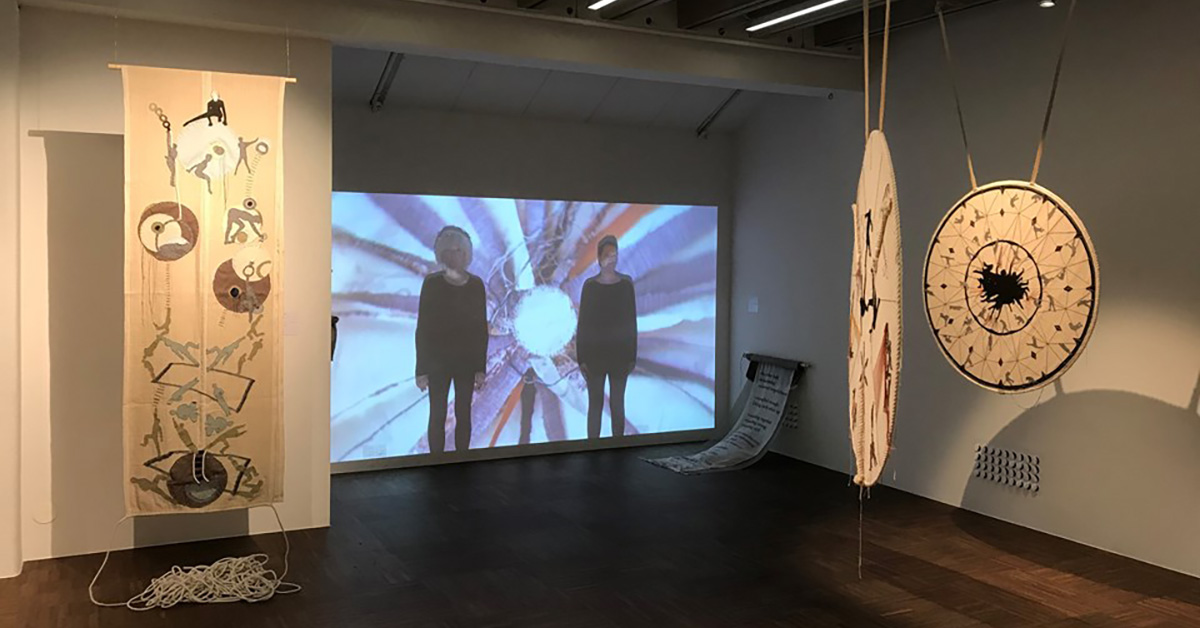 About Translation in motion by Maria Andersson and Nancy Atakan

Maria Andersson and Nancy Atakan share an interest in transcultural exchanges, and a key word in their collaboration is serendipity, the ability to incorporate random discoveries.

Weaving the tapestry of time

With their fascination for social and societal phenomena and changes, Maria Andersson and Nancy Atakan involve the people and places around them in their activities. The collaboration and process of creating the works often extend over a long time period.

Maria Andersson is based in Stockholm, and the American artist Nancy Atakan has lived in Istanbul for the past 50 years. Their paths crossed nearly ten years ago, shortly after Maria Andersson had been in Istanbul during a sports event and heard the audience sing a familiar tune, which prompted her to start unravelling how a Swedish ditty had come to Turkey. Meanwhile, Nancy Atakan had, for a long time, been inspired by and studied urban professional women in Turkey born under the Ottoman Empire. From different directions, their research led them to the same point, but many threads were added to the weft before it became the tapestry it is today.

The prologue to this exhibition consists of research that led to the Ottoman officer Selim Sırrı Tarcan, born in 1874, who cultivated a strong interest in physical exercise and athletics since his early youth. He was particularly influenced by Pehr Henrik Ling, “the Father of Swedish Gymnastics”, and Ling’s ideas on the benefits of gymnastics based on four cornerstones – educational, military, medical and aesthetic – to strengthen the body and the nation. Tarcan spent a year as an observer at the Gymnastiska Centralinstitutet in Stockholm, and implemented Swedish Ling gymnastics in Ottoman schools after returning home in 1910; this eventually developed into a modernist project in the young Turkish state. He also introduced other Swedish cultural expressions, as the exhibition and Karl Örsan’s essay relate.

The theme of the exhibition, however, focuses more on Tarcan’s daughters, Selma and Azade. Both were raised in the contemporary spirit, close to nature to thrive from fresh air, sunlight and exercise, and both studied gymnastics in Berlin in the 1930s. Inspired by Isadora Duncan, Selma was more interested in the performative aspects of dance, while Azade was drawn to the therapeutic effects of gymnastics; the sisters became pioneers in their respective fields in the early years of the Turkish republic.

In individual and collective works from 2014 to today, Andersson and Atakan explore the close relationship between the gymnastic and educational ideals of modernism and women’s emancipation in Turkey. My Name is Azade (Freedom) is an intimate presentation of the youngest daughter, in a series of drawings with hand-written texts based partly on interviews with relatives. Azade was Nancy Atakan’s gymnastics teacher in Istanbul in the early 1970s. When she retired in 1980, she gave Atakan a 1.5-hour VHS tape with exercises. Limber as a cat, Azade demonstrates all the movements and gives clear advice on how to do the programme. But it took 35 years before Atakan rediscovered the tape and incorporated the material in her work. Even if only a few of the movements relate directly to Ling gymnastics, the slightly grainy images convey a link to its philosophy. For the work Passing On II, Atakan worked in a similar spirit, selecting a few of Azade’s original movements, recreating and repeating them together with a group of close female friends and relatives of various ages, a shared experience that moves through time and space.

Several layers are added to the theme in Learning from the Past/Preparing for the Future, where the artists individually or collectively pose in front of a photo of female gymnasts from the previous turn of the century in Stockholm and try to emulate their frozen postures as closely as possible. As viewers, we add further strata to history with our bodies and the shadows they cast. Andersson’s recent work, The Model, treats us to a poetic and contemplative essay on the place where these exercises were performed, a slow tracking of a gymnastics hall from the late-19th century.

In two joint textile works, Empty Forms and Juggling Dreams and the circular Transition Series, the artists explore motifs referring to Ling gymnastics and the two daughters’ activities, but also to ideas on regimens for transcultural collaboration and textile similarities across borders. One of the works also reappears as the backdrop in the video Positioned in the Present, filmed in Istanbul on 1 May, 2019, a date that has recurrently been marked by commotion around Taksim Square.

Traces are found throughout the exhibition: Atakan’s Between Hope and Hopelessness, three photographs with textile and embroidery, shows women gymnasts in the optimistic Turkey of the 1920s. Andersson’s Traces offers visual clues, and the texts in her artist book Anthems relate, among other things, how Ling gymnastics reached far beyond Sweden, as a modernist social project. In The Traveler rhythmic notes tell the story of how the Swedish song she heard in Istanbul made its way to Turkey, and how it has remained popular in Sweden to this day.

The exhibition Translation in Motion presents the explorative practice of Maria Andersson and Nancy Atakan, interweaving Sweden and Turkey, past and present – in a complex tapestry about cultural translation in motion that bridges time and space. 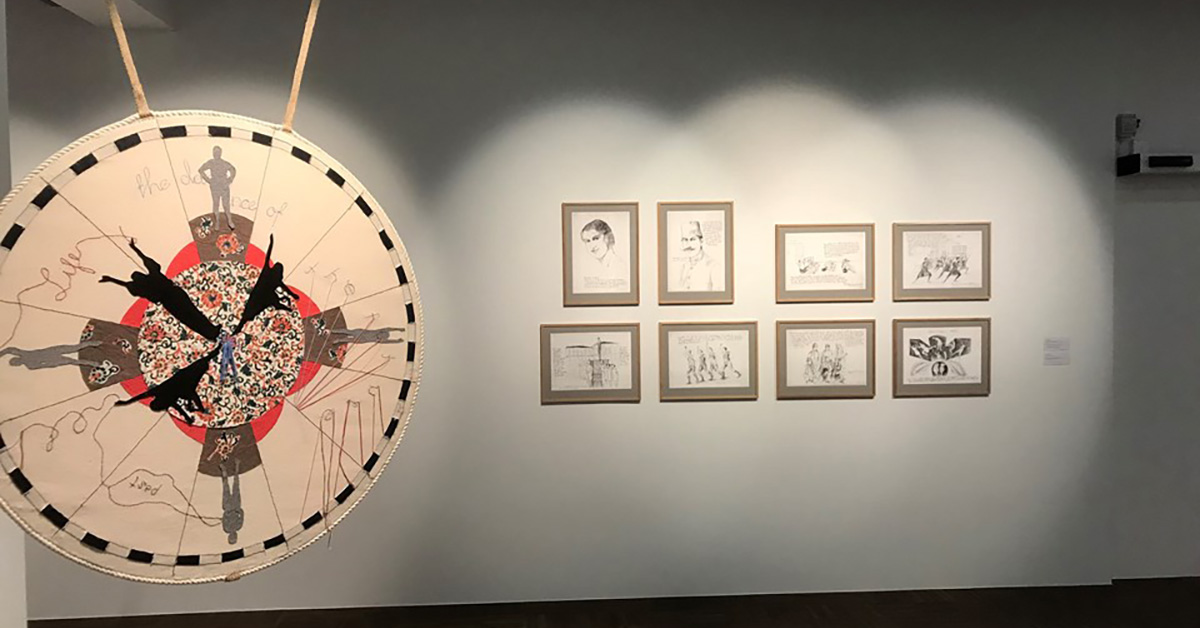 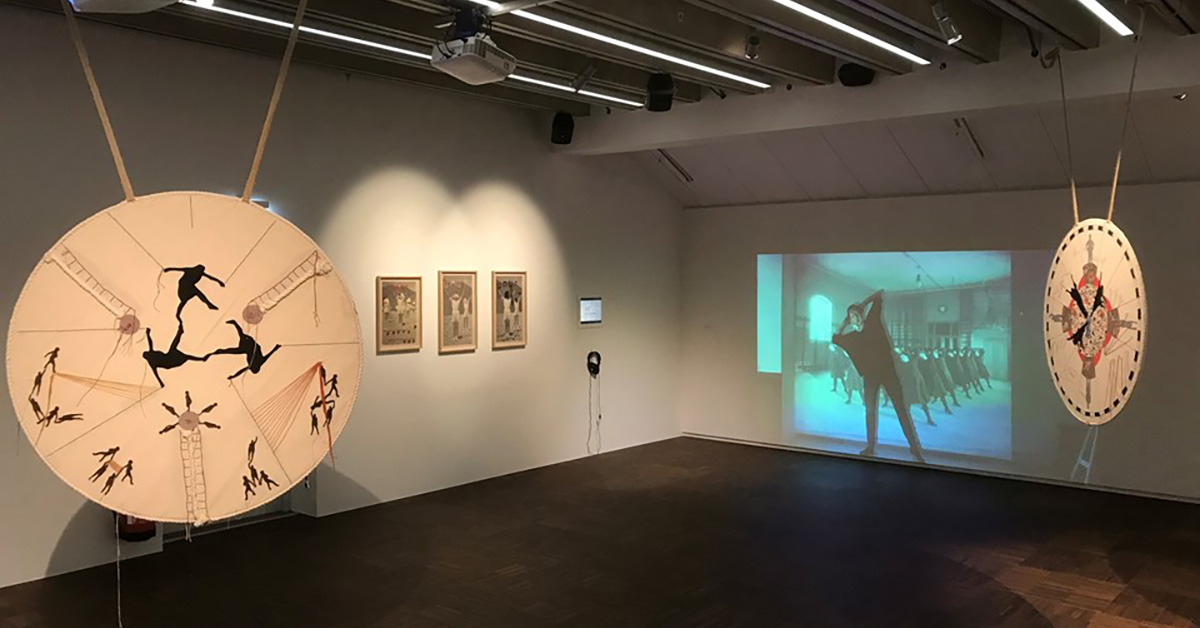 Watch Continuous Scroll (video), performed live on Jan 30th 2020 at the opening of the exhibition.